The arrogance of Labour (and National)

I had a very interesting time at Cafe Conversations on Sunday. This was a “meet the candidates” meeting in Christchurch East, but not all of us candidates were standing in that electorate. Candidates there were:

I said we would listen to what they had to say, as they know the needs of those they are representing better than we do, and would weigh it up against Christian principles and the level of apparant public support for the group. The National candidate (Aaron Gilmore) agreed with me. I really don’t see how any other view could be anything but arrogant. We must get rid of Labour this election.

However, Aaron Gilmore did himself no favours on the issue of National funding Herceptin for 12 months. The audience immediately saw through this for what it really is – state interference in Pharmac and politicians deciding which people get health treatment and which don’t (Pharmac has limited resources to allocate) – and he was seriously booed. I was quite surprised at this, because National is obviously taking this position as an emotive issue to buy votes, not scare people away. He then accused everyone who didn’t want Herceptin to be funded for 12 months of being in favour of letting women die – at which point he was shouted down by the entire room and Dr John Pickering (United Future, a medical researcher) stormed across the room and nearly came to blows with him! Matthew Gardiner (ACT) put it best when he said something like “you can’t accuse everyone who disagrees with you of wanting to kill puppies”. Whatever the merit of funding herceptin for 12 months may be, Mr Gilmore needs to rethink how he promotes it!

Dr Pickering (UF) came across as a very likeable man, with very wishywashy policies. I already knew Mojo Mathers (Green) previously, and she came across as very sincere, it is unfortunate that she supports a load of nutty Green policies, otherwise she’d make a good MP. She is profoundly deaf and does an excellent job of speaking to a crowd for someone with that disability. Matthew Gardiner (ACT) came across as a sensible guy who was prepared to listen to the point of view of others.

The Democrats for Social Credit candidate (I think his name was Nick McIlraith) didn’t really come across at all. No-one could understand what he was talking about. Instead of answering the questions he would launch into a long-winded spiel about the evils of the money system which lost everyone after 5 seconds. I felt rather sorry for the guy, as far as I could gather he thought we would be better off under hard-line communism, and I would have been interested to know why he thought communism was such a good idea, but he didn’t manage to convey this at all. Very confusing. People aren’t interested in the money system, they want to know how policies will actually affect them, and he didn’t answer this for any question at all.

After some initial scepticism from some of the audience about my stance on global warming, I got some excellent applause for our environmental policy – once I had explained that the ETS would actually do absolutely nothing for the environment yet cost an arm and a leg to do that, points that Ms Dalziel and Mrs Mathers had conveniently neglected to mention when they had spoken just before me. There also seemed to be support for funding following the child, based on the amount of nodding heads. I also got a great response when I was unable to give a straight answer to a question (that we have no policy on yet) and bluntly said so while pointing out that no-one else had given a straight answer either because we were all politicians!

I had some good discussions with people who had come along afterwards, it was a great afternoon. The food and drink looked and smelt great but I spent so long talking I missed it… My 3-month-old son James was very happy, squealing away down the back, until Sarah had to take him out and walk up and down the road with him because he was so happy he couldn’t contain himself!

I have been reporting the Colmar Brunton poll for the last couple of months, as it is the only poll that actually reports the minor party results, other polls sticking them all into an “other” category. For the last two months the Family Party has been sitting above the Progressives, at a similar level to or just below United Future, and Kiwi has hardly been registering at all. But there is a massive amount of error at these low percentages, and this latest poll shows how things can jump around at this end of the poll!

United Future, Family Party, Progressive, Libertarianz and Destiny, all of whom have been registering in the poll over the last two months, got no votes at all. This is a massive turnaround, showing that you can’t place too much faith in these polls! As a 1000 person poll, 0.1% means just 1 person picked that party, so you can see where the error comes from.

However, in previous polls I have been summing the Christian Heritage + Destiny + Family Party votes to get an indication of where we might stand. This is because Christian Heritage and Destiny don’t exist any more (although some voters haven’t realised yet), but we are the closest replacement for these voters to move to. This comes to 0.5% this poll, holding rock steady – it was 0.5% in both August and July. Once again, this is higher than United Future, Kiwi and  Progressives – three parties with current MPs. So although the poll result looks odd compared to previous polls, on closer analysis it isn’t bad at all for the Family Party.

I am keeping a running tally of poll results here.

Wedding on a budget

If you get the Herald on Sunday, you might have noticed this article, on having a wedding on a tight budget, and a second article on the example of our wedding, with a nice photo of my wife Sarah and myself. Alice Hudson points out that:

While reports say the average Kiwi wedding costs $19,000, the budget crisis is forcing couples to go to great lengths to keep costs down – and hopefully still afford a worthwhile honeymoon.

Some engaged couples, such as Christchurch’s David Moyle and fiancee Kelly, have decided to put off their nuptials indefinitely.

They’ve told prospective guests “We couldn’t afford to have a wedding and a baby”.

This situation is quite common. People are choosing to live together rather than getting married because of the perceived cost of a wedding. This is very unfortunate, because marriage forces you to actually think about whether you are prepared to stick together for the rest of your lives, and provide a stable home to raise children in. It is on the other hand easy to start living with someone to “see how it goes”, end up having children and realise later that you aren’t prepared to stick together. However high the divorce rate gets, defacto relationships still split up more than marriages, and when this happens it is terribly hard on children. Marriage is important as it forces you to think about the future rather than just going with the flow.

But weddings don’t have to be expensive. You can of course get married in the registry office for a couple of hundred dollars. But even a fancy wedding doesn’t have to cost the earth.

Our wedding cost around $5-$6000, which got us (with a lot of very generous help from friends and family):

You don’t need to spend $19,000 for a lovely wedding! I cannot think how our day could have been better. Having an afternoon tea instead of a reception meal was great as we could invite everyone (including the extra people who happen to turn up to the wedding on the day) along, rather than having to make a short list of “special” guests and offending those on the fringes of the list who get left off… The fancier you want it though, the more help you need from family and friends. 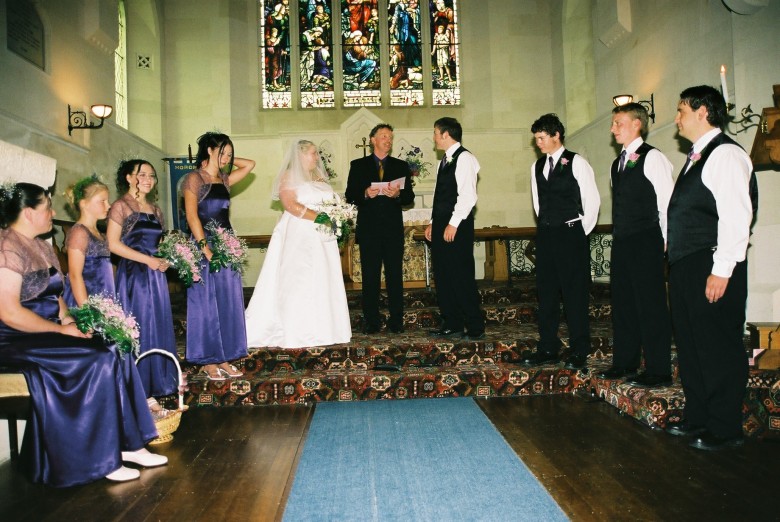 If you want to get married, go for it! It doesn’t have to cost the earth. Marriage is the best thing you’ll ever do. Don’t worry too much about the wedding, the wedding is unimportant in the grand scheme of things. Getting married is about the Marriage, which lasts the rest of your life, NOT about the one-day wedding. Big difference. Focus on making the marriage work. Do a pre-marriage course, it is the best investment you’ll ever make, Marriage Ministries does great courses through churches throughout the country – if I can only offer one piece of advice, that would be it.

P.S. The article says we were married on January 14, and have a 3 month old baby, which could give quite the wrong impression if someone thought it meant January 2008 rather than January 2006!